My roadmap learning experience so far

December 08, 2017
This is now my second year having to come up with a roadmap for what we call 'release', so while I'm not old hat, I am definitely learning and getting a little better!  One of the fun aspects of this is looking at the 'how you go about roadmapping', as in, if you are starting from scratch or not, what are the exercises you can go through to help you develop a plan for the coming year?

We're fortunate enough to have a CTO who pushes things like value proposition design (pain-gain diagrams), and encourages us to really think through what it is we are trying to do - plus takes the time to guide us himself.  Last year's roadmap started with a fresh canvas and the question 'if you could only work on one thing, what would it be?'.  This was to help focus my scattered brain, and I found it a great starting point.  As I am also a visual person, draw.io was used extensively to sketch out my thoughts (also used my whiteboard, but draw.io is portable).

What follows is my roadmap story; the good, the bad, the ugly.  Hopefully someone out there can benefit from this shared experience.  I'll endeavour leave the specifics of what I'm trying to accomplish out of this - just focus on the process.

Officially the unofficial release guy, I was asked to lay out a release roadmap for 2017.  My metrics/goals were release impact and release cadence - two big things I wanted to improve.  The timing was kinda vague, mostly because I was in the stance of 'roadmaps are silly, we should be doing continuous/iterative improvement' (because I viewed roadmapping as a rigid commitment process, not as a clarification and alignment exercise - a good lesson in the power of mental models).  A lot of metrics were put down but almost none were used (mostly because the roadmap was quickly forgotten in the rush of daily work).

While I stuck with the fundamentals for the first two quarters, a lot of the detail pieces were not done, mostly because of time and focus.  This is not to say that we didn't accomplish good things - it was just more scattered than it needed to be, and perhaps poorly prioritized.  Further, there were a lot of 'good things' (think 'excellence') in the roadmap, but not necessarily things that would alleviate pains AND bring gains.

fig.1 Excel layout of the basic four things I wanted to focus on - Problem/Goal/Result/Success markers

fig.2 Draw.io version of the above, with some timeline aspects attached and more details 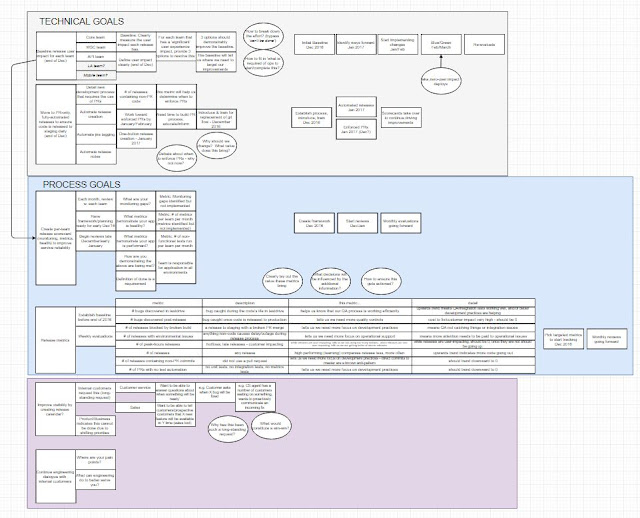 Our big company offsite happened in early May, and a lot of things came to mind (15-20 pages of notes/ideas), plus a lot of great conversations with folk.  One of the outcomes was my CTO saying 'let's work through release priorities together' - which leads us into the iterations following...

He correctly deduced that I was seeing too much and trying to attack all of it, so he (forced :) ) me to answer a very simple question:

"If you could only work on one single thing right now, what would it be?"

It helps having someone else ask you this, because they prevent you from going off in circles, but the following exercises helped me answer that question.

The advice I got was this:  When trying to tackle issues like 'How do I figure out what to do next?', there are two approaches:
So use this advice to build your huge pile of issues/ideas.
If you can't come up with a list of problems like this, socialize your efforts!  (or perhaps you are dead and in heaven)

fig.4 My braindump of things, and attempts to tie things together - this on its own was a multi-iteration process 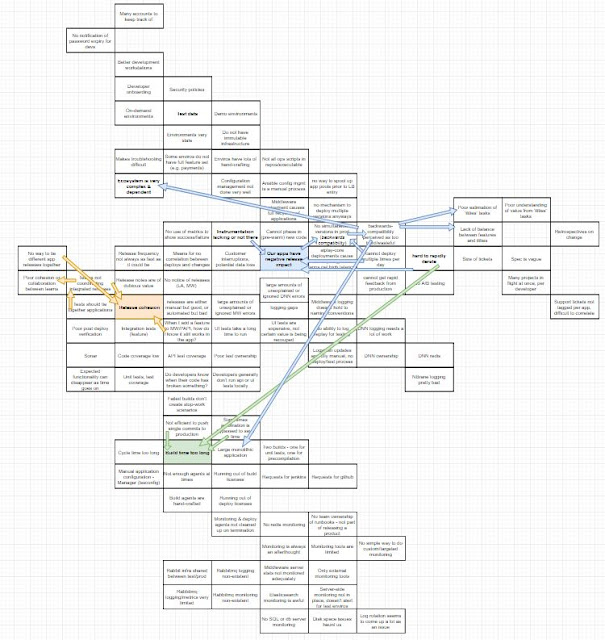 Decide with your manager what your metrics are - this is a separate exercise on its own, but generally your manager should have a clear idea of what he needs you to deliver.  In my case, my CTO handed mine over, but I was in full agreement anyways (see the original roadmap above).  His approach was an upstream perspective - which is where I should have been focusing anyways.  e.g. Release impact is a good thing to measure, but it's not a KPI, it's a symptom - you actually care about quality.  Poor quality software or process (upstream things) leads to poor release impact (customer = downstream).
REMEMBER!!! The entire point of this exercise is to demonstrate to yourself that what you are doing is not only valid, but conclusively so.  You just might prove your original intentions/hypotheses wrong - that is okay!

fig.5 The chart below has each 'thing' as a row.  Columns are as follows... 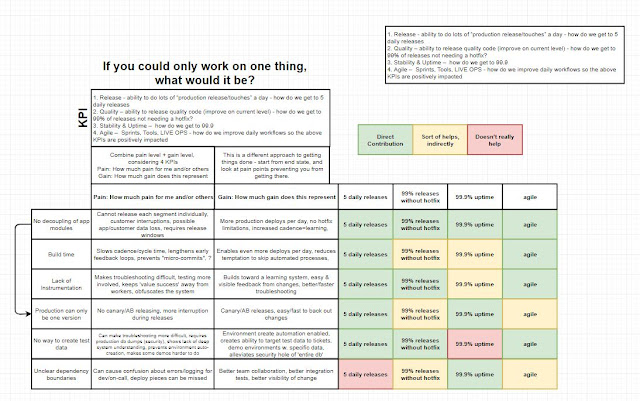 Now that you have the first version put together...update the metric fields from colours to colours + explanations.

There are only so many hours in a day, and you'll get interrupted - realistically look at what can be cut, or pushed back to next year.

Once you have this much done, your manager should be on board (or work with you to get things wrapped up), so you can get crackin'!

Communicate and get to work

This obviously differs based on your context, but for me, I needed now to communicate my intentions/plans with the rest of the engineering teams, laying out expectations, goals, what to expect next, etc.

With that done, I launched into the first task.  The roadmap/three things was consulted periodically to gauge how I was doing, but for the most part I just got done what needed to.

Over the rest of the year I managed to accomplish 1.5 of those 3 items.  Obviously a lot more happened, and I probably could have been a bit more focused, but this was a huge improvement over the previous year.  The impact of just one of the 3 things was significant - building not only better team morale/confidence (not to mention confidence in engineering by other internal departments), but reducing the symptomatic measurements to almost nothing.  Without this roadmapping/refocusing effort, that gain almost certainly would not have happened.


Year2 - Trying to improve on the process

So for this year's roadmap, I used some of the same tools, and bodged around with other ideas.  My CTO also wanted to see milestones included, so that was added into the mix.  You can see that the simple Excel version is a little more organized, has more information, and references the new metrics.

I then experimented with alternative ways of visualizing my year.  Here I have set themes for each quarter, and tried to layer project steps around continuous tasks.
fig.9 experiment #1

Which led to this generic overview showing continuous tasks alongside initiatives/projects.
fig.10 experiment #2

And then I started this process in an effort to better visualize/break down the '3 things' chart from year1 (fig.7).  The goal is to use a plan-do-check-act format, but use the process to iteratively improve the validity of what I'm trying to accomplish...uh...which is a terrible way of saying 'prove to myself this is actually what I want to do'.

So if you were to take the 'Gates' project/initiative from the previous diagram, it would look like this:
fig.12 a pile of project cycles 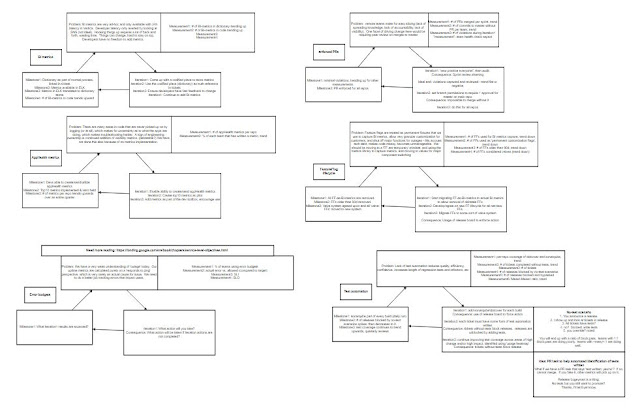 The final presentable roadmap was a mix of the year's overview (fig.10), the project cycles (fig.12), and detail around the continuous tasks.

So why do all this?

At the end of these exercises, you will have confidence that what you are doing is the right thing.  And if you are doing the right thing, you are being effective!  Almost as importantly, you will be able to effectively communicate what you are doing and why to the people that need to know.
Hope this helps someone.  It's by no means a MBA-grade course on creating roadmaps, but it should help you get off the ground in a somewhat organized fashion.  If this post seemed rambly, it's because I was trying to distill 30-40 draw.io pages, dozens of pages of notes, half-remembered whiteboard sessions, two-years' worth of book/web learning, and many hard conversations with my CTO into a single post.  It's worth taking the time to figure out how your brain best thinks this kinda stuff out - learning how to learn is often the hardest, but most worthwhile!  Good luck!

Three facets of what I’m looking for… Help people change how they work for the better ( ways of working, technology ); help people change ( coaching ) Help the organization succeed through self-knowledge ( org. climate, org. metrics, mapping ) and a knowledge of their customers ( value ) Finding partners in building a BVSSH ( better value sooner safer happier ) organization ( the statement on models notwithstanding ) Two challenges every organization faces that I want to help and serve in… What do we do? ( value; mission/vision ) How do we do it? ( ways of working; flow ) An ideal job description might contain one or more of…  Descriptive titles: Flow Engineer , "tech-focused WoW Enablement Specialist", Systems Convenor ( Ways of Working Center of Enablement ) Enablement role, with the goal of enabling product teams to improve the ways they work; advisory role around software development practices; pairing with technical process and automation prototyping Works to establis
Read more